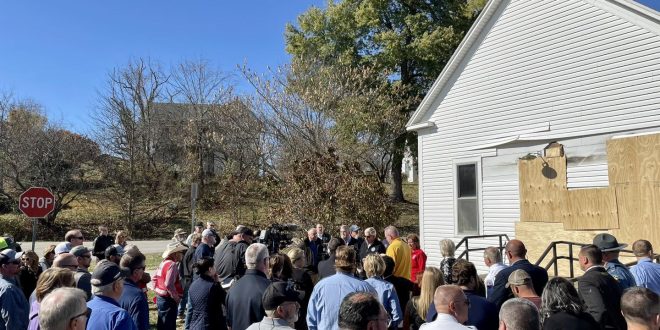 More than two dozen students at Columbia’s Tolton Catholic high school will travel to rural Wooldridge on Monday morning to help clean up the fire-damaged community. An October wildlife destroyed at least 23 structures in Wooldridge, which is in Cooper County. It also damaged at least 3,000 acres of land.

Tolton high school dean of academics Tim Scherrer says today’s cleanup is an opportunity to help residents who’ve been devastated by the blaze.

“And with all the needs that are down in the community of Wooldridge, we thought it would be a good opportunity to give back to the community with a spirit of the holidays. So we’re calling it Toltonsgiving,” Scherrer says.

Mr. Scherrer says 41 people have already signed up. That includes 29 students, three alums, six parents and three staff members. Today’s cleanup will begin at about noon and will primarily involve cleaning up properties and placing debris into trucks and dumpsters.

Mr. Scherrer tells 939 the Eagle that it’s the first time Tolton students have had the full Thanksgiving week off.

“I think we would have more people come but some have already planned to go out of town. And we’ve got staff that have already planned vacations and they’ve earned that. But for people who are here in town, this is what the school is all about. It’s about being thankful and giving to others,” says Scherrer.

Participants will be wearing work gloves and closed toe shoes. State Rep. Tim Taylor (R-Speed) tells 939 the Eagle that he’s elated that Tolton students will be in Wooldridge today, saying it will help immensely. Taylor says there’s a lot of work to be done, noting many of the town’s residents are older.