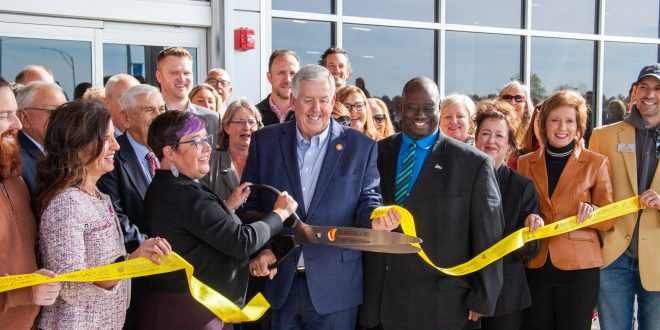 Dan Atwill tells 939 the Eagle that the project was needed, adding that the old terminal is outdated.

“We’re going to see more businesses interested in Columbia because of the appearance of the terminal and the impression that is given when people (travelers) first arrive,” Atwill says.

The aging current terminal was built in 1968.

Atwill, a Democrat, joined GOP Governor Mike Parson on the stage for this week’s ribbon-cutting ceremony. They’ve worked together on other key projects as well, including the massive new $240-million I-70 Rocheport bridge.

Supporters of Columbia Regional’s new terminal predict it will boost Columbia’s position as a health care hub. UM System President Dr. Mun Choi says about 10,000 isotopes made at the MU Research Reactor in Columbia are shipped out each week at COU.

“I’ve heard other stories from Mun Choi about the importance of shipping these nuclear medicines that he mentioned all across the country. And that all happens from here,” says Atwill.

The new terminal is also expected to help Columbia’s $221-million Roy Blunt NextGen Precision Health building, which U.S. Senator Blunt describes as a regional hub of lifesaving research. State Sen. Greg Razer (D-Kansas City), a Mizzou graduate, has told 939 the Eagle that NextGen has the capability of curing cancer, Alzheimer’s and dementia. The COU terminal and NextGen have both been bipartisan issues.

The first flight at COU’s new terminal is Wednesday.