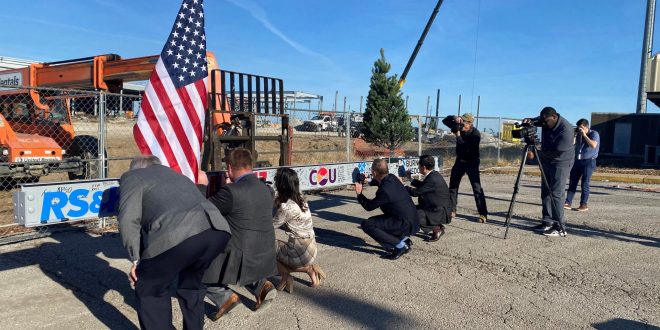 More than 100 people turned out on a warm December Thursday afternoon to sign their name on the final beam of the $23-million new terminal being built at Columbia Regional Airport (COU).

“It’s dramatically larger, almost four times as large as what we have now to accommodate four gates. And you know the thousands of enplanements and deplanements that Columbia Regional Airport has experienced in the last few years,” Treece says.

COU’s current terminal was built in 1968. The new terminal is expected to open in the summer of 2022, and its main funding source is a hotel tax approved by Columbia voters in 2016.

“If we can bring more patients to Columbia or fly these life-saving cures out of Columbia Regional Airport. We’ve also got the Roy Blunt NextGen Precision Health facility that can bring scores of patients and faculty here to Columbia, Missouri,” says Treece.

Mayor Treece and Jefferson City Mayor Carrie Tergin spoke at Thursday’s ceremony, and they emphasized cooperation and COU’s importance to both communities.

Mr. Treece describes the new terminal as a generational investment that will put further destinations in play.