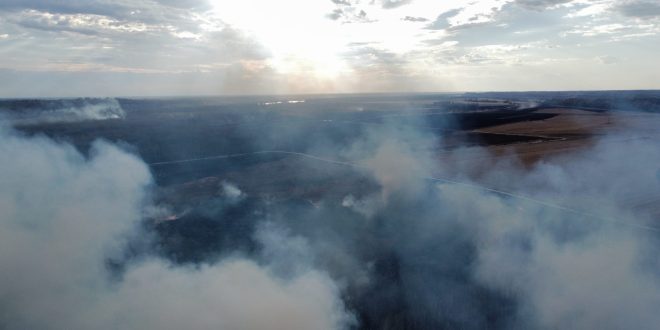 An aerial view of smoke from the Woolridge and Cooper County fire on October 22, 2022 (photo courtesy of 939 the Eagle listener Stephen McBee of MyStudioBee.com)

Blaze destroys at least 3,000 acres in Cooper County, including in federal wildlife refuge

While no serious injuries are reported, the Cooper County Fire Protection District says the fire burned between 3,000 and 3,500 acres. The district says Saturday’s fire started at about 3:15, adding that high wind speeds and low humidity caused it to spread to nearby structures and into the Big Muddy National Fish and Wildlife Refuge, which is operated by the U.S. Fish and Wildlife Service.

More than 50 fire departments from across Missouri battled the blaze, and the Boonville MFA and Pilot Grove Co-Op also provided water tankers.

The massive fire closed heavily-traveled I-70 for two hours due to low visibility from the heavy smoke. State Rep. Tim Taylor (R-Speed), who served as a firefighter for 22 years, was in Wooldridge on Saturday. He tells 939 the Eagle that I-70 was closed between the Highway 87 exit at Boonville and the Wooldridge exit, near the Missouri River.

The village of Wooldridge is located in Missouri Senate Majority Leader Caleb Rowden’s district. Leader Rowden (R-Columbia) tells 939 the Eagle that he is heartbroken to see the pictures and hear of the devastation in Wooldridge. “My office certainly stands ready to help in any way as these folks begin the road to recovery and restoration,” Rowden says.

Keep your radio tuned to 939 the Eagle for any updated information. We’ll have the latest on “Wake Up Mid-Missouri” Monday morning starting at 5:30.