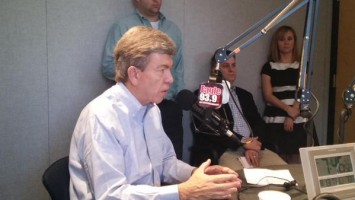 He was warmly welcomed on the Republican-friendly FOX News program, where, among other things, he outlined the party’s plans for the new Congress next year and the remainder of the 2018 session.

Blunt said the GOP would have an easier path to confirming judges with what he assumed would be a majority of 53 Senators in 2019 over the current 51.  “You get a little more flexibility to stretch a little bit more on someone that couldn’t be appointed if it took absolutely every Republican, but could be if it took almost all Republicans,” said Blunt.  A Republican is thought to have the edge in the one Senate race yet to be determined, a runoff race in Mississippi.

The recent confirmation of Supreme Court Justice Brett Kavanaugh was done so by a tight 50-48 margin with one Republican, Lisa Murkowski of Alaska, voting against him while one Democrat, Joe Manchin of West Virginia, voted for him.  Blunt said the Republicans would try to clear more judges to the bench between now and December 31st.  He claimed Democrats had gone to unprecedented lengths to obstruct the confirmation process of Presidential appointments.

When asked by host Maria Bartiromo about Arizona Republican Jeff Flake’s threat to vote against all nominees unless the Senate passed his bill to protect special counsel Bob Mueller’s investigation, Blunt said the attempt was futile because President Trump would never sign such a measure.  Blunt also claimed Flake’s legislation would be an unconstitutional breach of the separation of powers because it would amount to the legislative branch determining who could serve in the executive branch of government.  As special counsel, Mueller was appointed under the Justice Department which is overseen by the President.

The native of southwest Missouri’s Niangua noted the two Supreme Court Justices confirmed under President Trump would have an impact on the high bench for decades because they’re lifetime appointments.

When Bartiromo asked him about Senator Claire McCaskill’s loss to Republican Josh Hawley in this month’s Missouri Senate race, Blunt said the Democrat’s message was out of step in a state that is becoming more conservative.  He also noted Trump, who campaigned heavily for Hawley, enjoyed higher approval ratings in the state now than when he was elected in 2016.

Bartiromo also asked if Blunt thought President Trump’s tone would change over the next two years as he’ll up for reelection in 2020.  Blunt said Trump would remain vocal over actions he found objectionable, particularly investigations into his administration by Democrats who will control the House in the new year.

He warned House Democrats that Trump would engage in verbal warfare against investigations in a sharp contrast to previous Presidents.  “Probably the best thing Democrats could do in the House would be to legislate rather than investigate,” Blunt said.  “But if they investigate, they’re going to have an active participant talking about how those investigations are being conducted in the White House, and that participant is going to be the President of the United States.”  Blunt also commented that any claims or lawsuits against Trump’s administration in the House would not see action in the Republican-controlled Senate.

Bartiromo, a Republican partisan, then claimed there was a “cabal” of top members of the Justice Department and the FBI who tried to prevent Trump form being elected in 2016.  She asked Blunt if Senate Republicans would pick up where the House Republicans had left off in investigating the activities of the two agencies.  Blunt said the upper chamber’s Judiciary Committee would probe into the Justice Department and the FBI, and stated that classified information would be uncovered which would be surprising.  He didn’t elaborate on what that information would be.

The FOX News host brought up comments by Boeing Corporation head Dennis Muilenberg, who said the defense budget would be sustained in the upcoming Congress after sequestration measures were taken to cut spending across the board.  Blunt noted the headquarters for Boeing defense operations is in St. Louis and said the state is proud of the workers there.  He claimed the defense capacity had diminished during the “Obama decade” and said spending and orders for equipment had been replenished more recently.

Blunt also said it’s important for the United States to have an unfair advantage in any military conflict.  He agreed with recent reporting that China had stolen U.S. technology secrets which had impacted the military.

The two-term Senator also appeared on ABC’s This Week, where host Martha Raddatz inquired about his thoughts as a member of the Senate Intelligence Committee.  The CIA has concluded Saudi Crown Prince Mohammed bin Salman ordered the killing of Jamal Khashoggi, a Washington Post columnist and U.S. resident who has been critical of Saudi actions.

President Trump has hardened his refusal to concede any possibility that the prince had a hand in the crime, this weekend calling Saudi Arabia a “truly spectacular ally.”  Blunt noted President Trump would make a decision on what actions would be taken over Saudi Arabia’s possible role in the killing by Tuesday.

The Senator said the CIA’s conclusion was not the absolute proof needed when considering action against the middle eastern country.  He suggested sanctions similar those under the Magnitsky Act, in which Russian officials responsible for the death of a Russian tax accountant were denied admission into the U.S. and had their assets frozen, would be an appropriate response if the Crown Prince had ordered the killing.

But he said the U.S. should have absolute proof before taking measures against Saudi Arabia, an ally against a common enemy in close by middle eastern country Iran.  “If we’re going to deal with this relationship which does really impact the balance of power in the middle east, it does really impact the balance to Iran which is clearly a bad actor, we need to be absolutely sure we know exactly what we’re talking about, and not what the first step is, but also what the second and third step that that first step would lead you to,” Blunt said.

Blunt also dismissed a tweet by former Obama deputy national security advisor Ben Rhodes.  He said Rhodes’ claim that Trump knew the Crown Prince was responsible for Khashoggi killing and lied about it was “wild speculation.”

Raddatz asked Blunt whether the appointment of Trump loyalist Matt Whitaker to be acting Attorney General was appropriate.  He said it would be important for Trump to appoint a permanent Attorney General, saying Whitacker was competent but not the proper choice over the long term.

Blunt said President Trump would be unlikely to nominate a permanent Attorney General until after to first of the year when a stronger majority Republican Senate could fend off Democratic attempts to undermine it.

In regard to the Attorney General confirmation process, he reiterated a point he made on FOX News Sunday Futures that it would be inappropriate for Congress to tell the President who can work in the executive branch. Blunt also restated his disapproval of Senator Flake’s bill to protect the Mueller investigation.  “This idea that we’d have a debate and have a vote and put a bill on the President’s desk that he wouldn’t sign, I don’t think that’s nearly as impactful as members continuing to say ‘Mr. President, we need to get beyond this.  You need to let this come to a conclusion,” said Blunt.

Blunt appeared on FOX News Sunday Futures for more than 12-and-a-half minutes and spoke on ABC’s This week for almost eight minutes.