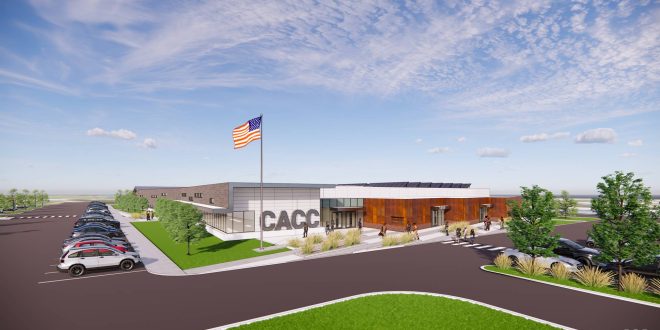 This is what the expanded and renovated Columbia Area Career Center will look like in the future. (graphic courtesy of CPS' Michelle Baumstark)

“We’ll be looking at our (CPS) scholars graduating with certifications that would allow them to go into the workforce directly. Whether it’s dealing with different forms of photography, culinary arts,” Dr. Yearwood says.

He tells 939 the Eagle that another example is auto mechanics. One CPS teacher says several of her students want to be realtors.

Superintendent Yearwood is excited about the $15-million addition and renovation planned at the CACC. It was included in a bond issue approved by CPS voters in April.

“We want to give them choice and allow them to decide for themselves this is the best fit for them, so that way they are not forced into an industry or a career that they’re not interested in,” says Yearwood.

Business leaders who spoke at Wednesday’s Regional Economic Development Incorporated (REDI) board meeting praise the career center, and several want to work with CPS on internships. Superintendent Yearwood welcomes and encourages that.