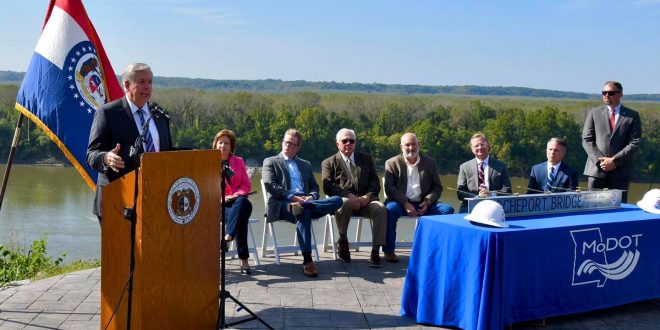 Missouri Governor Mike Parson speaks at a groundbreaking ceremony for the new I-70 Rocheport bridge project, as U.S. Rep. Vicky Hartzler and others listen (October 12, 2021 photo courtesy of the governor's Facebook page)

State transportation officials need one final permit from the U.S. Army Corps of Engineers before construction will begin on the $240-million new I-70 Rocheport bridge project.

Top Missouri and regional leaders broke ground on Tuesday, on a bluff overlooking the Missouri River. Columbia Mayor Brian Treece has pushed for the project for years.

“This is one of those extraordinary investments that’s going to pay dividends for the next generation. You know I talk about generational investments, and it’s hard to beat a $230 million bridge. Most of us take this (current) bridge for granted,” Treece says.

The current I-70 Rocheport bridge, which was built in 1960, is in poor condition. It carries more than 12-million vehicles annually. The two new Rocheport bridges will be built to last one hundred years, according to MoDOT.

“That means not only raw ingredients coming into the town of Columbia, Missouri, but exporting our products. You know, Oscar Mayer hot dog that’s consumed in the country is made right here in Columbia, Missouri. And that all has to cross this bridge,” says Treece.

Missouri has received an $81-million federal grant for the Rocheport bridge project, the largest competitive grant ever received by MoDOT. The new bridges are scheduled to be done by December 2024.

Previous ‘I’m not a guy that needs the hype’: How 5-star recruit Patrick Baldwin Jr. found a home at Wisconsin-Milwaukee
Next Overtime Elite announces 2021-22 schedule, roster for inaugural season