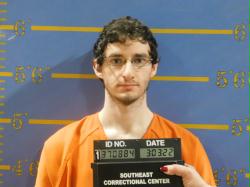 A Columbia man who was convicted of killing his wife in 2019 and burying her in Rock Bridge state park will serve his sentence at the state’s maximum-security prison in Charleston.

Joseph Elledge is serving a 28-year prison sentence, after being convicted of second degree murder in November. He arrived at the Charleston prison last week, after spending a few months at the reception and diagnostic center in Fulton.

“What was really important about that case was the deterrent effect that I hoped it would have on other potential would-be criminals,” Knight says.

Elledge was convicted of killing his wife, Menggi Ji. Knight notes he filed murder charges without a body, and also emphasizes the importance of playing nine hours of recorded tapes in court.

“What I tried to do in that case is basically provide information about resources that are available for survivors of domestic violence, especially in the immigrant communities,” says Knight.

Defense attorney Scott Rosenblum told jurors that this was never a murder case. He’s described the death as a tragic accident, not a murder.