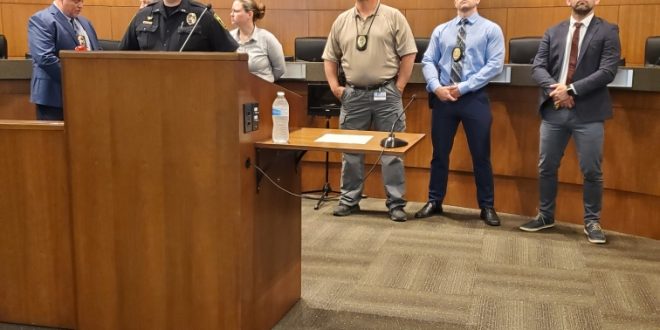 Columbia Police Chief Geoff Jones prepares to brief reporters and the community on the Samone Daniels case on June 28, 2022 (photo from 939 the Eagle's Brian Hauswirth)

Columbia Police are crediting a letter found this month at a local Super 8 for helping solve the case of an infant death. The infant’s parents have been charged in the case and are jailed without bond.

Infant remains were discovered in a tire near North Providence road in August 2019, and police have always said their main goal was to give the child a name and honor her memory. Police Chief Geoff Jones broke down several times at Tuesday’s press conference at city hall.

“Samone J. Daniels. We believe she was between four and five months old at the time of her death. We believe she had been in the tire since 2017,” Chief Jones tells reporters. “You’ll have to excuse me, this has had a toll on a lot of us, especially the investigators behind me.”

Fountain is currently on probation for stealing. Because of the murder charge, his probation is expected to be revoked and he’ll likely be sent to state prison to serve the stealing conviction.

Court documents in the high-profile case remain sealed this morning. A 939 the Eagle reporter went to the Boone County Courthouse on Tuesday to request the probable cause statement. The court says that’s not a public record at this time. That indicates they’re still sealed.

Meantime, Chief Jones is crediting the community and a letter found at a local Super 8 for providing a major lead in solving an infant’s murder. The chief says someone at Super 8 contacted police, after seeing the letter. That person “was encouraged to not contact police,” according to Chief Jones.

It’s unclear how the infant died. We asked Chief Jones Tuesday if investigators have determined a cause of death.

“We definitely have a theory based on statements provided (by the suspects) to the investigators. We’re going to wait until the medical examiner and the anthropologist are able to work with our investigators to make that final determination. We don’t have it yet,” Jones tells 939 the Eagle.

Jones does not believe there are additional suspects in the case.