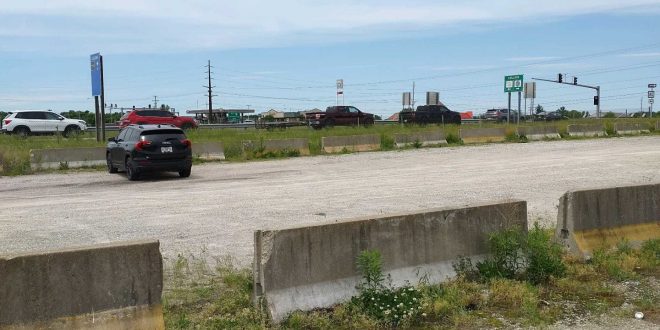 MoDOT wants to remove this commuter lot near Highway 63 and Grindstone in Columbia (May 22, 2022 photo from 939 the Eagle's Brian Hauswirth)

Thursday is your opportunity to learn details about the $8 to $9-million project to upgrade heavily-traveled Highway 63 and Grindstone in south Columbia.

The state Department of Transportation (MoDOT) plans an open house that afternoon from 4:30 to 6:30 at New Haven elementary school. MoDOT project manager Zachary Osman says the biggest change is the addition of a loop ramp.

“And it’s going to allow travelers from either direction to make a right turn to go north onto 63,” Osman says.

The project is scheduled to be awarded in early 2024, with construction starting in 2025. Osman says the upgrade will increase capacity in the area. Motorists coming off of Lemone Industrial drive say it’s almost impossible to make a left turn towards the school, during daytime hours.

“And we’re also going to be widening Grindstone/New Haven through the stretch. So really the capacity for every movement is going to increase,” Osman says.

MoDOT wants to improve the northbound Highway 63 entrance and exit ramps, along with improvements on Grindstone Parkway, New Haven road and Lenoir street.

Traffic is also heavy near Ponderosa and La Crosse Lumber. Mr. Osman says MoDOT is also looking at the west side of the intersection.

“We had hoped through our traffic study that with the changes on the east side that will relieve enough congestion to really help over there without a lot of construction,” says Osman.

MoDOT also plans to remove the commuter lot on the interchange’s southeast corner.