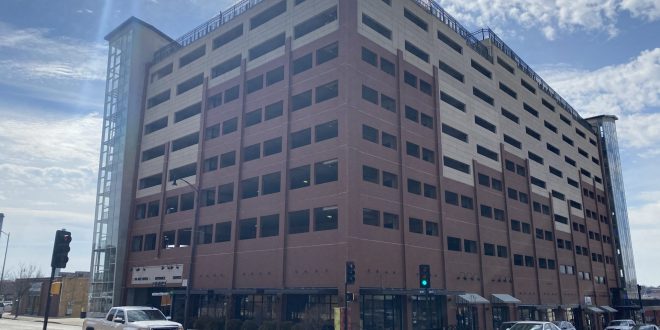 Fencing has now been completed on the top level of the Fifth and Walnut parking garage in downtown Columbia (March 4, 2022 photo courtesy of Columbia spokeswoman Sydney Olsen)

Columbia officials say fencing has been completed on the top level of a downtown parking garage that has seen several suicides since it opened in 2011.

The city council approved the $489,000 project for the Fifth and Walnut garage in October 2020, but city officials say COVID escalated the cost of materials, especially steel components. That’s why the city is working in phases.

The council first-read a bill Monday night for the installation of side-window panels on the garage. The $500,000 project will be paid for from the general fund. Columbia spokeswoman Sydney Olsen tells 939 the Eagle that steel panels would cover open spots at the garage.

Our news partner ABC-17 reports Jonathan White led a recent petition effort for more adequate suicide prevention barriers at the nine-level garage. Mr. White’s September petition noted that there had been eight suicides at the garage, ranging from people in the 20s to their early 90s.

City staff is recommending that the council approve the installation of the side window panels at the next council meeting.