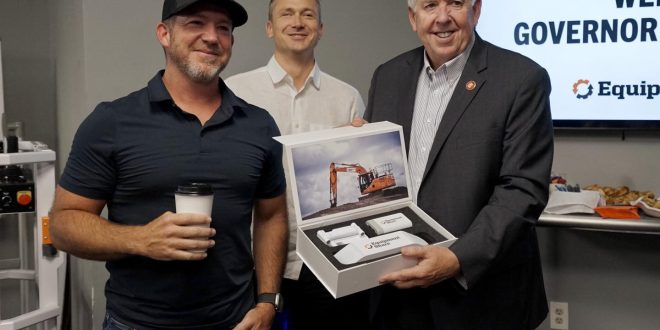 EquipmentShare expansion is one of the largest expansions in Columbia history

“It was a fun day to be here, needless to say. When you get a $100-million investment and 500 new jobs coming to Missouri. It’s a good day for Columbia,” Parson tells reporters.

EquipmentShare will build its new corporate headquarters by the former Ashley furniture building near I-70’s Lake of the Woods exit. It will include a flagship office building and a research and development center. They plan to add 555 new jobs over the next five years, as part of the expansion. Columbia has beaten out Alabama, Louisiana and other states in landing the massive project. That pleases Governor Parson.

“I’ll tell you: game on. Bring it on. You know we’re going to do everything in our powers to bring businesses to our state. And you know, we have to compete with all these other states all the time. Because we know they want these businesses just like we do,” he says.

EquipmentShare currently has about 3,600 employees, with about 470 of them at the former Ashley furniture building. Boone County commissioner Justin Aldred has told 939 the Eagle that the average salary for the 555 new jobs will be $42,000.

EquipmentShare executives say the new 35-acre campus will be something everyone in the state can be proud of.

“So we’re so proud to be able to announce this, a $100-million investment. And this building right here which is really cool, it’s about 50,000 square feet. Our new campus is going to be about ten times that size,” company spokeswoman Meg Judy tells reporters.