Fitzpatrick sworn in as Missouri Treasurer

(Missourinet) A three-term Missouri House member was sworn-in as the 47th state treasurer during a Monday ceremony at the Statehouse in Jefferson City. 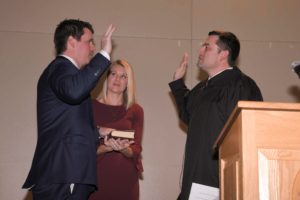 Fitzpatrick says he’s humbled and honored about his new opportunity. Fitzpatrick, who helped to build boat dock manufacturer MariCorp US into a multi-million dollar enterprise, says government must work for the people. 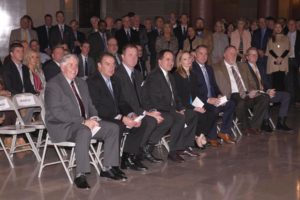 “I witnessed our government standing in the way of my ability (at Maricorp US) to keep people working due to the inability or unwillingness of bureaucrats to sign off on permits,” says Fitzpatrick.

During his remarks, Fitzpatrick also emphasized fiscal restraint and support for small business.

Governor Parson announced the Fitzpatrick appointment during a December 19th press conference at the Capitol. Fitzpatrick replaces Schmitt, who was appointed attorney general to replace Republican Josh Hawley, who was elected to the U.S. Senate in November.

Fitzpatrick tells Missourinet his resignation from the House took effect Monday afternoon at 3:30.

“I served with Scott for four years (in the House), had an opportunity to see him first-hand, his leadership, his abilities,” Wiemann says. “He’s certainly a young man but he’s very accomplished, even at his young age.”

Fitzpatrick is 31 years old. The governor says Fitzpatrick has more experience and knowledge of the state budget than any other elected official.