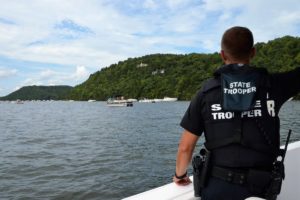 Patrol Lieutenant Collin Stosberg is urging you to exercise care on the road.

Missouri state troopers say the Fourth of July holiday weekend is historically one of the deadliest ones on the road because of alcohol. Lieutenant Stosberg says four people died and another 220 suffered injuries in Missouri traffic crashes during the 2018 holiday.

“If everyone wore their seat belt, (if) no one would drink and drive, if motorcyclists wear their helmet and people would obey those traffic laws, we would have zero fatalities,” says Stosberg.

The Highway Patrol says an Independence Day DWI enforcement operation will take place during the entire holiday weekend. Troopers are enforcing all Missouri statutes, including driving while intoxicated and underage drinking.

The 2019 holiday counting period begins Wednesday evening at 6 and goes through 11:59 Sunday night.

Meantime, the Patrol says the Fourth holiday weekend is also one of the busiest boating holidays of the year. Lieutenant Stosberg is urging boaters to be alert for other boats and for swimmers.

“If you’re out (on the water) at night, that seems to be the deadliest crashes,” Stosberg says. “Make sure your navigation lights are on.”

Lake traffic is expected to be heavy this weekend. Missourinet Versailles affiliate KTKS (FM 95.1) reports more than 250,000 are expected to celebrate the Fourth of July weekend at the Lake of the Ozarks.