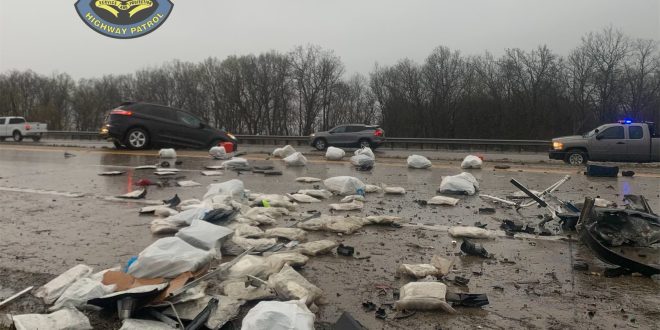 The crash closed the eastbound lanes near Williamsburg for a few hours. That’s about 15 miles east of Kingdom City.

Troopers have arrested two men from the country of Mexico: David Mora Navarro and Victor Gonzalez Acosta were in the GMC. There were no serious injuries in the crash.

There were so many packages of marijuana that it covered both lanes and the side of the interstate as well. The Patrol’s report says the crash happened when the GMC driver crashed into the back of a semi. Another tractor trailer than crashed into the GMC.

Previous How Xavi changed Barca, what they’re doing right and what they still need
Next UPDATE: Suspect killed in Fulton’s deadly home invasion was a convicted murderer