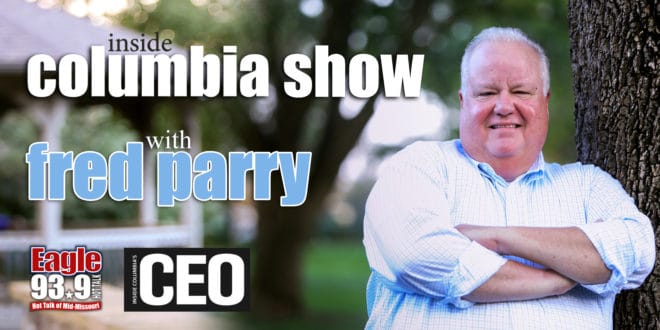 The Inside Columbia Show is a weekly public affairs radio program that features conversations with the newsmakers associated with the events and headlines of the week. Every show will feature in-depth interviews and analysis from the movers and shakers behind the week’s headlines. The show is hosted by Fred Parry and can be heard on Saturday mornings at 7:00 am on 93.9 The Eagle.

Fred Parry is an elected County Commissioner for Boone County, Mo and Publisher Emeritus for a Inside Columbia and CEO magazines.

Parry is a native of Liberty, Mo., and a 1986 graduate of the University of Missouri.  He began his career working for newspapers in Chicago, Washington, D.C., and Pittsburgh, Penn.  He is a former member of the advertising faculty at the Missouri School of Journalism. He worked as an advertising executive for the Gannett newspaper chain before he and his wife started their own publishing company in 1994.

Fred has now spent more than 30 years in the publishing industry. He is the founding publisher of more than 10 magazines. In addition to his publishing career, Fred spent nearly 8 years as a daily radio talk show host and three years doing weekly commentaries for a local CBS Television affiliate.

Parry is a past member of the Board of Directors for the City and Regional Magazine Association (CRMA) and the past president of both the Missouri Association of Publications (MAP) and the Missouri Interscholastic Press Association (MIPA).  In 2011, Parry was recognized by Folio magazine as one of the top 40 innovators in the nation’s magazine industry.  In 2013, Parry was named to the prestigious Folio 100 List.

Parry has been active in his community for more than 25 years serving as the Chairman of the Board for Boone Hospital Center, past commissioner for the Columbia Housing Authority and former president of Columbia’s Northwest Rotary Club. He has also served on the boards of the Columbia Chamber of Commerce, Arrow Rock Lyceum Theatre, KOPN Radio, the Missouri Symphony Society and the Food Bank for Central and Northeast Missouri.  In  2006, Parry was named the Outstanding Citizen of the Year by the Columbia Chamber of Commerce.

Parry has written two Christian men’s devotionals, Walking With James: Becoming The Man God Intends You To Be (Illumify Global Media) and Walking With Ephesians. Parry is the founder of the annual CoMo Christian Men’s Conference which has attracted the nation’s leading pastors (Matt Chandler, Craig Groeschel, Lee Strobel, Todd Wagner, Robert Lewis, etc) to Columbia, Mo. over the last seven years. He leads a weekly Bible study for businessmen on Friday mornings.

Fred has been married to his wife, Melody for 27 years. Together, they have two grown sons, Max and Nick.