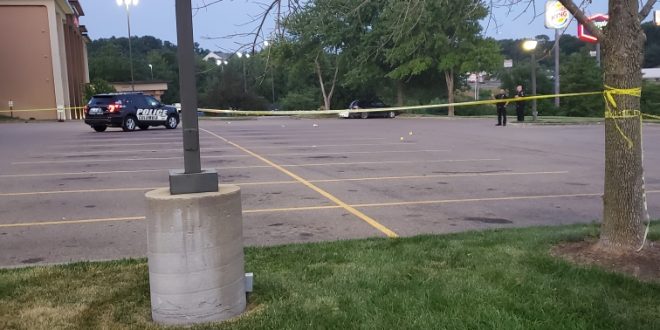 There were at least two evidence markers in Columbia's Cracker Barrel parking lot on July 9, 2022 (photo from 939 the Eagle's Brian Hauswirth)

Man shot in Columbia restaurant parking lot this weekend; no arrests yet

Columbia Police are asking for your help in solving a weekend shooting that happened in the busy Cracker Barrel parking lot on Clark Lane.

CPD spokesman Christian Tabak tells 939 the Eagle that Saturday evening’s shooting happened at about 7:45, near I-70.

“Officers arrived and secured the scene. Evidence of a shooting was found when they arrived. And after further investigation, a victim was located in the 4500 block of Rice Road,” Tabak says.

It’s unclear if the victim was driven to Rice road or not.

“The Boone County Sheriff’s office and Columbia Police did provide medical care to the victim on-scene until EMS could transport them to a local hospital. Right now, the condition of the victim is unknown,” Tabak says.

939 the Eagle’s Brian Hauswirth saw at least two evidence markers in Cracker Barrel’s parking lot Saturday evening, and also saw officers searching a trash can for evidence. He also saw CPD investigators searching the parking lot for shell casings and saw them on the ground wearing blue gloves, searching the grass with flashlights looking for something.

The Cracker Barrel parking lot where the shooting happened is behind the restaurant, and has busy hotels on both sides. It’s also very visible from heavily-traveled I-70.

Anyone with information on the shooting should call Columbia Crimestoppers at (573) 875-TIPS.