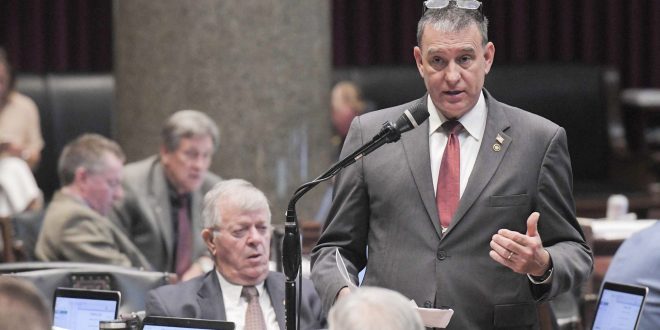 (Story has been updated to include information that Grain Belt is specifically exempt from the legislation, and that it only impacts future projects)

It’s important to note that Grain Belt is specifically exempt from the legislation, and that it only impacts future projects.

The bipartisan bill has been a top priority for Farm Bureau and for the Missouri Pork Association and the Missouri Cattlemen’s Association. Bill sponsor State Rep. Mike Haffner (R-Pleasant Hill) says House Bill 2005 protects Missouri’s family farmers and the constitution.

Supporters say the bill says Missouri is open for economic development, but that it will not come on the backs of Missouri’s farmers and ranchers. State Rep. Chuck Basye (R-Rocheport) voted for the bill.

“One of the guys I really enjoy working with, Representative Mike Haffner from Cass County, he’s put a lot of effort behind that. And when we finally got that done, he was just giddy,” Basye tells 939 the Eagle.

The bill was approved by the Missouri House on a bipartisan 111-32 vote, and by a 19-10 Senate vote. Lieutenant Governor Mike Kehoe (R) says the bill will end for-profit abuses of eminent domain.

There are critics of the bill, who worry it could impact important future projects similar to Grain Belt.