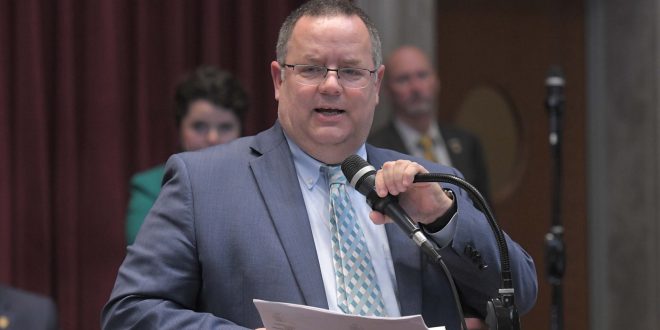 Missouri House and Senate remain at impasse over congressional redistricting

Missouri is the only state in the nation where a new U.S. House map has not been enacted or approved by state lawmakers, according to the Associated Press. The AP notes there is still uncertainty in some states because of court challenges or vetoes.

The Missouri House declined to vote Tuesday afternoon on the Senate-approved map, amid complaints from state representatives in both parties. They instead voted to send the map to a conference committee.

State Rep. Cheri Toalson Reisch (R-Hallsville) criticizes the Senate map for splitting Columbia and Boone County. She says Boone County should remain in the fourth congressional district, which is now held by U.S. Rep. Vicky Hartzler (R-Harrisonville). The Senate map moves most of Boone and all of Cooper and Moniteau counties to east-central Missouri’s third district, which is held by U.S. Rep. Blaine Luetkemeyer (R-St. Elizabeth).

State Rep. Mike McGirl (R-Potosi) is also critical of the Senate map, which redraws the suburban Second District down through his rural southeast Missouri district.

“Take a look at that district. It runs from up around Creve Coeur (and) Ladue, down through Iron County,” McGirl tells House colleagues.

The House voted 115-19 on Tuesday to send the map back to a conference committee for further negotiations. One of the 19 members who wanted to approve the Senate map is State Rep. Chris Sander (R-Lone Jack). He went to the House floor to complain that his current congressman, U.S. Rep. Emanuel Cleaver (D-Kansas City) is unresponsive. Sander says the Senate map moves his area to the fourth district.

“But I’ve lived in Lone Jack three years and have yet to have a phone call back, an e-mail back or any communication or even meet our U-S congressman from Congress District 5,” Sander says.

State Rep. Jerome Barnes (D-Raytown) went to the House floor to emphasize the importance of good government with redistricting maps, not protecting self-interests.

Missouri Secretary of State Jay Ashcroft tells 939 the Eagle’s “Wake Up Columbia” that it’s not too late for the issue to go to the conference committee. Secretary Ashcroft reiterates his frustration that the U.S. Census numbers weren’t delivered to Missouri until September 2021. He says they should have been delivered in December.

Previous Fantasy basketball: Foundational players to trust and build around heading into next season
Next Jaguars bolster pass rush, sign Key to contract