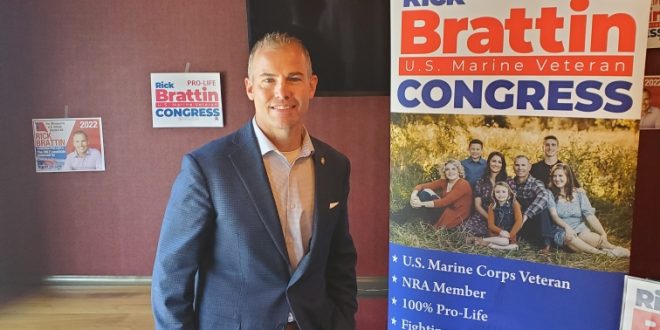 State Sen. Rick Brattin (R-Harrisonville) announced the endorsement during a Thursday press conference in Columbia. He tells reporters he hopes Roe vs. Wade is overturned.

“And hopefully with the Dobbs case we’ll see the overturning of Roe v Wade to where we’ll able to right this atrocity that has swept this land,” Brattin says.

Brattin is serving his first term in the Missouri Senate, after serving four terms in the Missouri House in Jefferson City. Missouri Right to Life attended Thursday’s press conference, saying Senator Brattin is the only candidate in the race with a proven record of sponsoring and voting for pro-life legislation.

Senator Brattin says protecting the unborn has been his top priority in the Legislature. He also describes the fourth district as the Bible Belt, and says his first oath is to God. He tells 939 the Eagle that he will not waver nor give in.

“And I think that’s what people are wanting, they’re clamoring for. They see in Washington people that are willing to squander your freedoms, liberties. We see the Second Amendment fight, the life fight,” says Brattin.

West-central Missouri’s new sprawling fourth district is primarily rural but includes parts of Columbia and northern Boone County. The district is heavily Republican. Brattin is one of seven Republicans in the August primary. The winner faces Lamar Democrat Jack Truman in the November general election.

Brattin was asked about Farm Bureau’s endorsement by a newspaper reporter during Thursday’s press conference at the Broadway Hotel. Senator Brattin says he and Farm Bureau have policy differences on farm subsidies.