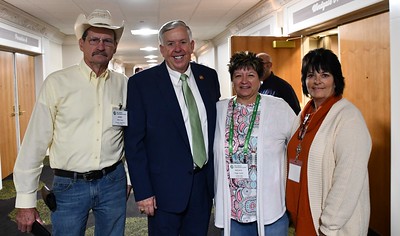 Missouri Governor Mike Parson meets with county leaders at the Missouri Association of Counties meeting at Lake of the Ozarks on November 23, 2021 (file photo courtesy of the governor's Flickr page)

Governor Mike Parson will unveil a $91 million supplemental budget request next week, which is aimed at giving state employees a 5.5 percent cost of living adjustment (COLA).

“The state employees are doing a good job. We want to make sure we give them a comfortable wage, (and) we’ve got some make-up to do. And, you know, we compete with the private sector every day for jobs,” Parson tells 939 the Eagle.

Under the governor’s budget that was approved by lawmakers last May, state employees will receive a two percent COLA increase on January 1. They would receive an additional 5.5 percent increase in February, if lawmakers approve Parson’s plan.

“We’re trying to find a base-line wage for when somebody comes to (work for) the state of Missouri you kind of know what that is. And then we want to be competitive with that. And then just being able to take care of the people that’s been here for 10, 15, 20 years. Dedicated Missouri employees,” says Parson.

The governor says veterans home care attendants and highway employees are among the lowest-paid state employees, and would benefit from his proposal.