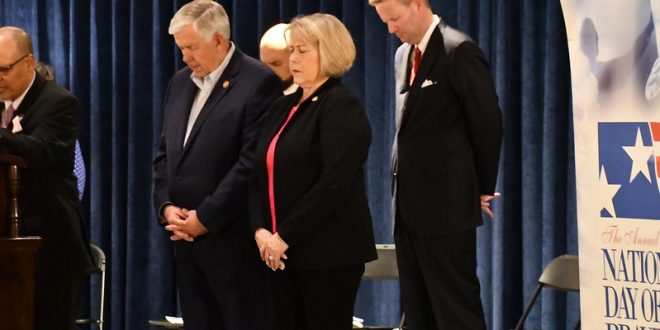 Missouri Governor Mike Parson and First Lady Teresa Parson bow their heads at the National Day of Prayer event in Jefferson City on May 5, 2022 (file photo courtesy of the governor's Flickr page)

Governor Mike Parson tweeted last night that he and the first lady are deeply saddened to hear the tragic news, adding that “we are praying for the victims’ families and friends and that they may find strength and peace in such a difficult time.”

Meantime, the congresswoman who represents Columbia on Capitol Hill describes Tuesday’s deadly mass shooting as “pure evil.” U.S. Rep. Vicky Hartzler (R-Harrisonville) tweeted last night, saying it is a horrific and senseless tragedy. Congresswoman Hartzler, a former teacher, also tweeted that “Lowell and I, alongside the entire state of Missouri, are praying for all those lost and their loved ones.”

She notes the victims were elementary students and a grandmother.