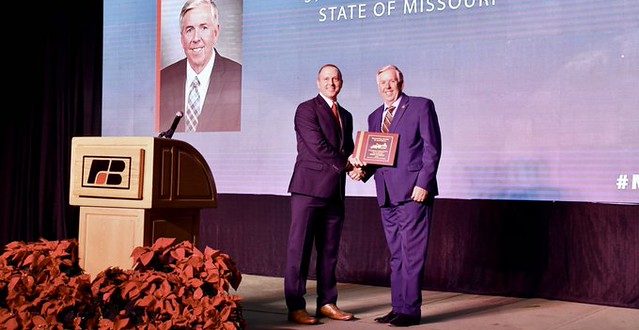 Governor Mike Parson (right) accepts an award from the Missouri Farm Bureau at their annual meeting on December 6, 2021 at Lake of the Ozarks (file photo courtesy of the governor's Flickr page)

Missouri’s governor focusing on infrastructure, workforce development and broadband in 2022

Missouri’s governor will continue to focus on his two main themes during the 2022 legislative session.

Governor Mike Parson tells 939 the Eagle that Missouri ranks in the top ten in both manufacturing and apprenticeships.

“I think we know workforce development. We know infrastructure works now. We’re seeing that compared to all the other states in the United States, how well we’ve done in this state,” Parson says.

The governor will meet with state leaders this week in Jefferson City, to prepare for the upcoming session. Governor Parson will outline his specific legislative priorities, during his January State of the State Address. We’ll learn details about his infrastructure and workforce development plans, at that time.

“I assume there’s going to be a lot of that. We’re going to be talking about broadband and how we just start building this state up to be competitive against the other states,” says Parson.

The state broadband office development director testified this year that there are at least 392,000 Missourians who lack high-speed internet, either because it’s not available or they can’t afford it.

Previous Transfer Talk: Bayern want to bring Sanches back to Bavaria
Next NHL to break early for holidays amid COVID spike