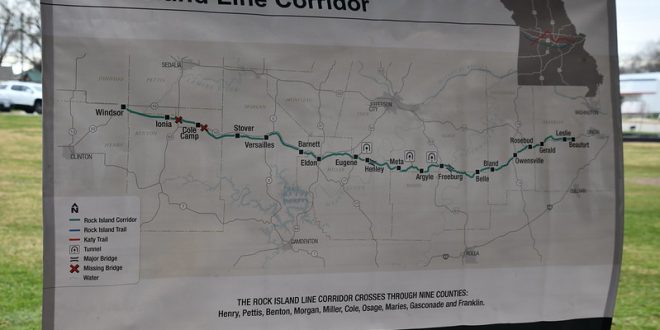 A map of the Rock Island Corridor, as shown at a December 14, 2021 event in Eldon (photo courtesy of Missouri Governor Parson's Flickr page)

Belle, Bland, Owensville, Versailles, Eldon, Eugene and Meta are just a few of the mid-Missouri towns that will benefit from the Rock Island corridor, according to Missouri’s governor and state officials.

The state Department of Natural Resources (DNR) accepted ownership of the corridor this month, and will develop the stretch into a public recreational trail. An Ameren Missouri subsidiary donated the property at no cost to the state.

Governor Mike Parson says the Rock Island trail will be the second rail-to-trail state park system in Missouri, and predicts it will complement the existing Katy trail. The line used to be the former Chicago, Rock Island and Pacific railroad corridor.