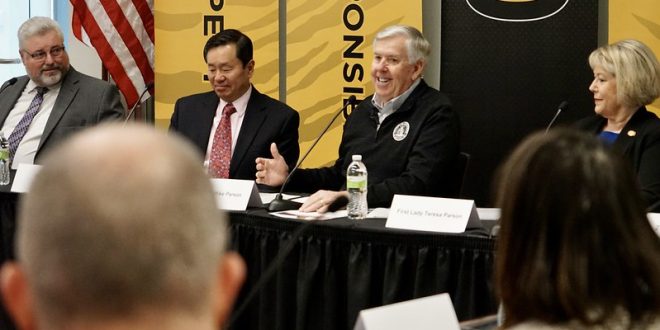 “When he delivered his (January) budget address, it included so much in investment for capital projects but also core increases. We are very excited,” Dr. Choi says.

President Choi tells 939 the Eagle that those investments will transform the University of Missouri, giving them the opportunity to develop stronger partnerships with Jefferson City’s Lincoln University and with Moberly Area Community College.

President Choi also says there’s not a stronger supporter of public education in Missouri than Governor Parson. Dr. Choi says the governor’s budget speaks for itself.

“Look what he’s been able to deliver. We had the highest increase in our appropriation in one-time spend funds last year, the highest in 35 years. And that’s not just for the University of Missouri, but all public institutions,” says Dr. Choi.

Governor Parson spoke at a recent education roundtable at Mizzou, telling Dr. Choi and other college and university leaders that he will continue to partner with them. But he emphasized that he wants to see plans and results. Dr. Choi agrees with that.

Previous NWS: Mid-Missourians should prepare for snow and travel disruptions on Wednesday evening into Thursday
Next Columbia’s IHOP is closed until further notice, following fire