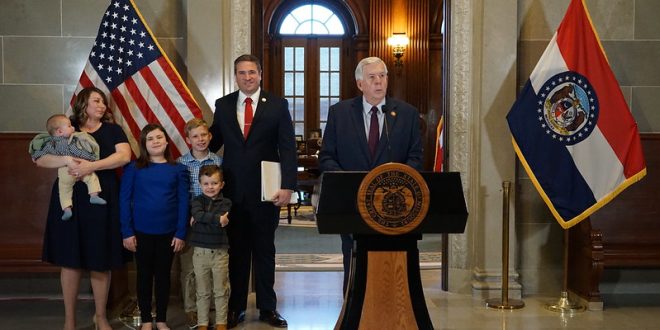 Missouri’s next attorney general is a familiar name in state government and at the Statehouse in Jefferson City.

Governor Mike Parson (R) has appointed his office’s general counsel, Andrew Bailey, to the post. Bailey has also served as a Missouri Assistant Attorney General and as general counsel for the Missouri Department of Corrections.

He will be Missouri’s fourth attorney general in six years. Governor Mike Parson says bringing stability to the AG’s office is critical. The governor says he looked for five core things with this appointment.

“Commitment to law and order, patriotism and respect for the (state) Constitution. Conservative values, family values and someone who would promote calm and steady while never afraid to fight for Missourians,” Parson says.

Bailey’s start date hasn’t been determined yet. While the governor didn’t say it, he implied that he expects Bailey to run for the post in 2024. Parson tells Capitol reporters that Bailey has had many accomplishments as general counsel for the governor’s office.

“We fought for the unborn and ended elective abortions in Missouri. We’ve strengthened the Second Amendment protections. Supported law enforcement at every turn,” says Bailey.

Bailey will replace U.S. Sen.-Elect Eric Schmitt, the outgoing attorney general. This is the second time Governor Parson has appointed an attorney general. Parson appointed Schmitt to the post in 2018, when Josh Hawley was elected to the U-S Senate.

‘We are hopeful that Mr. Bailey can succeed in the immense task that awaits him,” Leader Quade says, in a news release.

As for GOP Governor Parson, he says Bailey embodies the ideals of faith, family and freedom, and that he’ll fight for Missouri children like they’re his own.