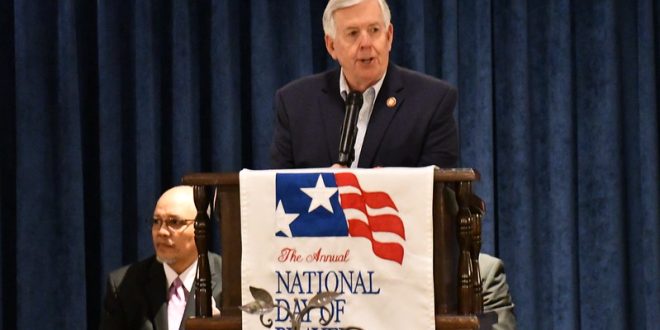 Governor Mike Parson speaks at the May 5, 2022 National Day of Prayer event at the Missouri Capitol in Jefferson City (file photo courtesy of the governor's flickr page)

Missouri’s GOP governor has signed a proclamation that he says ban abortions in Missouri, unless there’s a medical emergency. Governor Mike Parson signed the proclamation Friday morning after the U.S. Supreme Court overturned Roe vs. Wade. The ruling allows states to ban abortions.

“Today, following the United States Supreme Court’s ruling that overturned Roe v. Wade, with the issuance of an attorney general opinion, my office has yet again reinforced Missouri’s dedication to protecting the sanctity of life, both born and unborn,” Schmitt says, in a written statement.

Governor Parson has signed a proclamation that he says gives legal effect to the 2019 bill that he signed three years ago. Parson says it activates the “Right to Life of the Unborn Child Act.”

“Thanks to decades of conservative leaders, Missouri has become one of the most pro-life states in the nation, and our administration has always fought for the life of every unborn child. Today, our efforts have produced what generations of Missourians have worked and prayed for: today, we have won our fight to protect innocent life,” Governor Parson says, in a statement.

A Missouri Democratic congresswoman who serves on the House Judiciary Subcommittee on the Constitution, civil rights and civil liberties, sees the issue differently.

“Abortion care is health care. It was so before this. And it will remain so after this,” U.S. Rep. Cori Bush (D-St. Louis) tweeted this morning. “We don’t care what a far-right extremist Supreme Court that is in a crisis of legitimacy says. Your racist, sexist, classist ruling won’t stop us from accessing the care we need.”

“Abortion is health care, whether or not six GOP proxies try to make it immeasurably less safe and accessible,” Representative Gunby tweeted this morning.