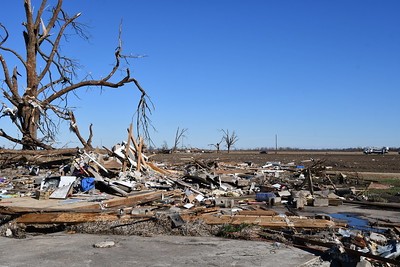 The tornado that struck southeast Missouri's Pemiscot County on Friday evening leveled homes. This photo was taken near Caruthersville on December 12, 2021 (photo courtesy of the governor's Flickr page)

Missouri’s governor says at least four people have been killed in the Show-Me State from Friday night’s devastating tornadoes.

A woman was killed inside her home during an EF-3 tornado in St. Charles County, and three people died in far southeast Missouri’s Pemiscot County. Governor Mike Parson says the Bootheel deaths include a semi driver on I-55 and another motorist on Highway 84.

The governor toured the damaged areas near Defiance and Pemiscot County on Sunday.

Despite several tornado warnings in mid-Missouri on Friday evening, there are no reports of deaths in the listening area. The NWS issued tornado warnings for Cole, Callaway, Audrain, Montgomery and Osage counties.

The National Weather Service in Memphis describes the storm system that began in Arkansas and went through the Bootheel as the “longest lived mesocyclone” ever.