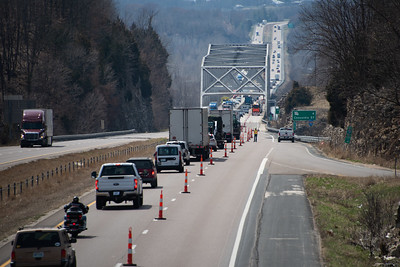 Motorists heading westbound on I-70 prepare to cross the aging Rocheport bridge on March 27, 2019 (file photo courtesy of the MoDOT Flickr page)

MoDOT: Missouri is on pace for more than 1,000 traffic fatalities this year

Thanksgiving Eve is traditionally one of the biggest travel days of the year, as Missourians head to their Thanksgiving holiday destinations.

State Department of Transportation (MoDOT) highway safety division spokesman John Nelson urges you to slow down and to take your time.

“Expect increased levels of traffic on the roadways, and do those simple things that you can do to keep yourself safe as well as others,” Nelson says.

He also urges you to drive sober and to put your phone down.

MoDOT says 911 people have been killed in traffic crashes in Missouri this year. Mr. Nelson is urging you to make good choices that can save your life and the lives of others.

“And that’s about a three percent increase from where we were last year. Unfortunately, we’re on pace to exceed one-thousand fatalities in our state this year,” says Nelson.

He also advises motorists to buckle up.