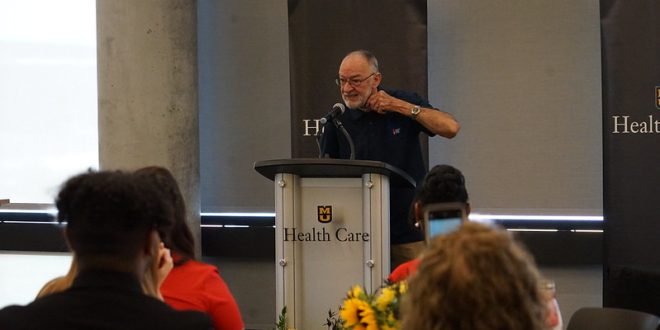 Former smoker Don Young, who lost his voicebox from smoking, shares his story with Governor Mike Parson and others at MU Health Care in Columbia on August 3, 2022 (photo courtesy of the governor's Flickr page)

The Missouri governor’s announcement about the largest single investment into tobacco cessation in state history is being praised by mid-Missouri’s largest health care system.

“It’s a really great start. We have a big need for that in Missouri. We have high smoking rates, our youth are using vape products. And so, building out programs and access for people to quit is going to be really important,” Dr. Everett says.

A “vape” is an electronic cigarette, and the CDC has said the use of e-cigarettes is unsafe for children, teens and young adults.

Governor Parson says the smoking cessation program is being increased from $50,000 to $2.5 million in general revenue.

Meantime, a Missouri man who smoked for more than 30 years before his voicebox had to be removed says he’s received a few thousand letters from people who say his story has caused them to stop smoking. Don Young spoke at the governor’s announcement in Columbia, and the entire room was silent as he spoke with the help of a machine.

“Don is such a great man to come out. He’s led a tough life because of what he had to go through, but he’s a wonderful advocate and really helpful to get people aware of challenges you can have if you end up smoking or using tobacco,” Dr. Everett says.

The governor says the funding he announced will be used to develop programs to protect minors from illegal sales of tobacco products. Governor Parson says tobacco is the leading cause of preventable disease and premature death in Missouri. He says 11,000 deaths are caused by smoking each year in Missouri.