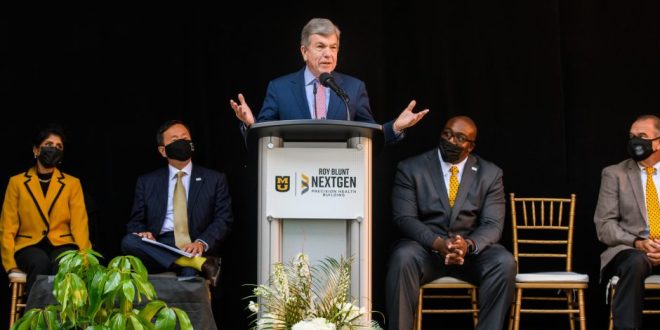 Hundreds of people turned out on a sunny Tuesday in Columbia, to celebrate the grand opening of the $221-million Roy Blunt NextGen Precision Health building. The 265-thousand square foot facility will be a regional hub of lifesaving research.

State Sen. Greg Razer (D-Kansas City), a Mizzou graduate, tells 939 the Eagle that NextGen has the capability of curing cancer.

“And so they’ll be finding the answers to cancer, Alzheimer’s, dementia, all sorts of problems that we have not known how to cure for years. And it’s going to happen right here in Missouri,” Razer says.

Next-Gen is expected to train the next generation of scientists who will help Missouri address future health care needs.

Columbia’s new Roy Blunt NextGen Precision Health building will have an estimated $5.6 billion impact on Missouri’s economy during the next 25 years, according to Senator Blunt.

Senator Razer, a prominent Democrat in the state Legislature, says NextGen has been a bipartisan issue.

“We have to begin to invest in ourselves again, and this is a great example. We’ve taken our foot off the accelerator for Missouri for the past couple of decades, and it’s time that we start using our resources. And this university (Mizzou) is one of those resources,” says Razer.

Senator Roy Blunt traveled to Columbia to speak at the ceremony.