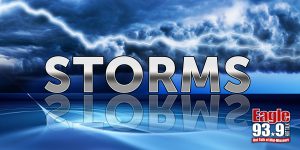 The National Weather Service (NWS) in St. Louis says straight-line winds are to blame for the overnight storm that has knocked out power to parts of mid-Missouri’s Mexico.

Mexico Public Safety Major Brice Mesko says numerous tree limbs and utility lines fell during the storm, which began at about 3:45 am.