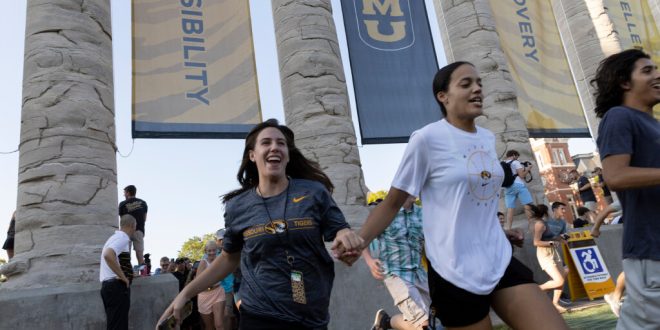 Thousands of new Mizzou students in Columbia have taken a class photo, as part of the popular First Roar tradition.

MU students met last (Thursday) night at Traditions Plaza, before walking several blocks to Memorial Stadium. Incoming Mizzou students will “Paint the M” at Faurot Field today at 3, where they’ll also meet more of their peers. A midnight barbecue is planned for 10 pm to 1 am on campus, along Rollins.

“Tiger Walk” is one of the biggest traditions for incoming Mizzou students in Columbia, and it will take place Sunday evening at the Francis Quad. Incoming students will walk through the Columns toward Jesse Hall to symbolically mark their entrance into Mizzou. You’re invited to join them Sunday evening at 6.

There has been heavy traffic around the Mizzou campus in Columbia for the past two days, as students have moved into their dorms and rooms