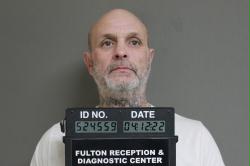 Convicted killer Steven Thorp is pictured here after arriving at the Fulton prison on April 12, 2022 (photo courtesy of the Missouri Department of Corrections)

Missouri’s Probation and Parole Board has quickly revoked the parole of a convicted killer who barricaded himself inside his Moberly home for more than 20 hours.

The 1993 murder happened in northeast Missouri’s rural Perry. Court documents say the victim, Richard Gillenwater, disappeared and was later found with two gunshot wounds to the back of the head. A shotgun was used.

Thorp has been returned to prison, where he’ll have to finish serving his 30-year sentence for second degree murder. The Missouri Department of Corrections’ website indicates Thorp has been paroled three times, after being convicted of murder.

Several listeners have asked why Thorp barricaded himself inside his Moberly home. Randolph County Sheriff Aaron Wilson tells 939 the Eagle that Thorp told negotiators that he didn’t want to go back to prison. The sheriff was standing there when Thorp said that.