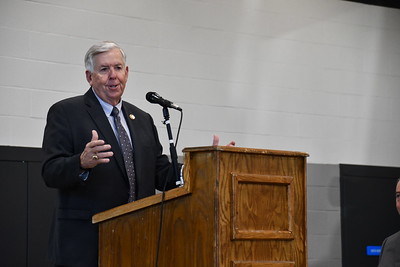 Missouri’s governor is praising plans to build a new tech center in fast-growing Ashland, saying it ties-in with his focus on workforce development.

“When you see Ranken community college is now coming down here, technical college coming down here, teaming up with Ashland at the high school (and) University of Missouri. That’s exactly the vision that we had three years ago, and we’re now really getting to see that first-hand,” Parson says.

The center will be built next to Salter Lawn Service, near Highway 63. It’s expected to open by the fall of 2023.

Southern Boone R-1 Superintendent Chris Felmlee says it will focus on IT, construction, nursing and manufacturing. The Ashland-area community has already raised $2.3 million of its $3 million campaign goal.

Meantime, Columbia’s continued growth has also caught the attention of Governor Parson. Columbia’s population has increased from 108,000 in 2010 to about 124,000 today.

“And if you look at Columbia as a whole, just in the three years I’ve been governor, it’s been unreal the businesses that have come in here. Large businesses, small businesses, and you can see it’s growing,” says Parson.