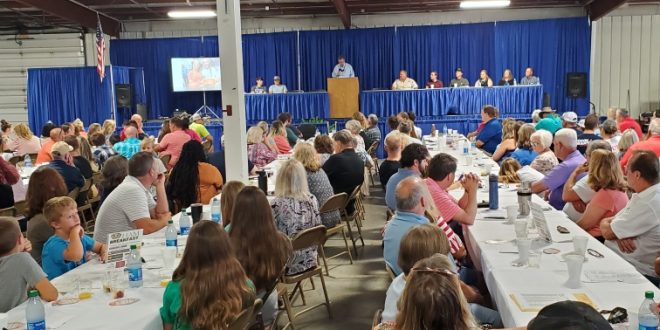 Farmers from across the region attended, along with numerous elected officials and candidates for office in Boone County.

Connie Leipard, a Republican running for presiding commissioner, says the fair and breakfast highlight the importance of youth and farmers.

“This is a treasure for Boone County to highlight all of the work of the youth in agriculture, and to show all the community how important agriculture and farming is to Boone County,” Leipard says.

This is the first time that Just Jeff’s catered the breakfast, and every review we heard at the fair was positive. Attendees dined on eggs, Boone County country ham, biscuits and gravy, potatoes and fruit. Democratic state legislative candidate Chimene Schwach was a big fan of the biscuits.

Former State Rep. Kip Kendrick (D-Columbia), who’s running for Boone County presiding commissioner, tells 939 the Eagle that the breakfast and fair in general are important parts of our community.

“You know being out here (at the fairgrounds) this week with my son and my wife Sarah, you know we’ve just seen this cross-section of Boone County. It brings out everybody. It shows the diverse nature but it also highlights agriculture importance that always has been part of who we are in Boone County,” Kendrick says.

“And so often when you hear a community event, you think it’s something happening in the central city of Columbia. This is something that really is all encompassing for the whole county. You got a lot of folks here from north and southern Boone County, people that are involved in agriculture,” Judge Jacobs says.

Judge Jacobs is seeking re-election in 2024.

“And what’s good is it helps 4-H kids bring in their projects. And the ham breakfast is a tradition that it’s just great to come out and see everybody,” Toalson Reisch says.

The fair wrapped up Saturday evening.