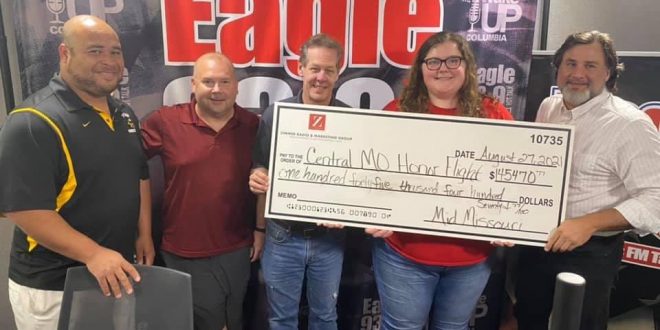 Listeners to Friday’s Central Missouri Honor Flight Radiothon on the Eagle and other Zimmer radio stations raised more than $145,000 for the program.

The 12-hour radiothon was held Friday to raise money for the Central Missouri Honor Flight, which takes veterans on a non-stop day trip to Washington, where they can tour war memorials at no cost to them.

The Honor Flight’s Mary Paulsell tells 939 the Eagle that about 5,000 mid-Missouri veterans have been on the Honor Flight, since 2009. Top priority is given to senior veterans from World War II, Korea and Vietnam who may be terminally ill.

Honor Flight organizers say the experience is an opportunity to give the veterans the welcome home that they never received.

Eagle program director Jeremy Washington says the $145,000 equates to sending four-and-a-half full planes of veterans to Washington to see their memorials built for them, at no cost to them.