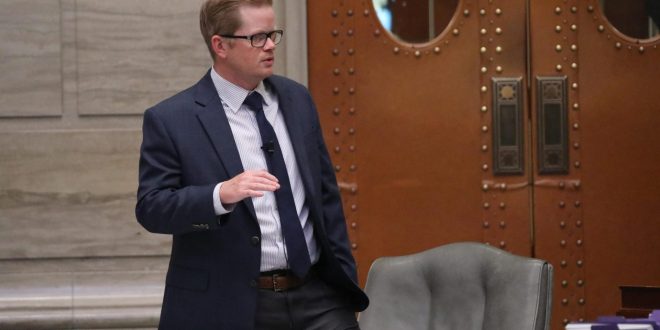 Rowden cites conservative victories in Missouri Senate; expects to be pro tem in 2023

Missouri’s Senate Majority Leader says he fully expects to be the new Senate President pro tem in January, when the 2023 session begins.

State Sen. Caleb Rowden (R-Columbia) has been criticized at times by the Senate Conservative Caucus, which disbanded this week. Floor Leader Rowden tells 939 the Eagle’s “Wake Up Mid-Missouri” that you don’t have to be “attention-seekers or chaos-creaters” to get things done.

“That’s why we’ve been able to pass a whole host of conservative things over the last four years. Tax cuts, a number of them. Huge pro-life legislation, huge Second Amendment legislation,” Rowden says.

He’s referring to the Second Amendment Preservation Act (SAPA), which declares that it’s the duty of the courts and law enforcement agencies to protect the rights of law-abiding citizens to keep and bear arms.

The former members of the Senate Conservative Caucus say it’s time for the Missouri GOP Senate supermajority to go fully on offense. Republicans control the chamber 24-10. They have said the Senate has moved toward operating in the same manner as the House.

As for Leader Rowden, he says he’s more interested in making history than in making headlines.

Leader Rowden tells “Wake Up Mid-Missouri” that the Senate is about relationships. He also says if the former Conservative Caucus members want to be in leadership, they have to have friends.

The former Conservative Caucus members want to see a new coalition of leadership. One of their key members, State Sen. Bill Eigel (R-Weldon Spring) will join 939 the Eagle’s Randy Tobler and Brian Hauswirth live Thursday afternoon at 4:15 to discuss the caucus’ decision to disband.