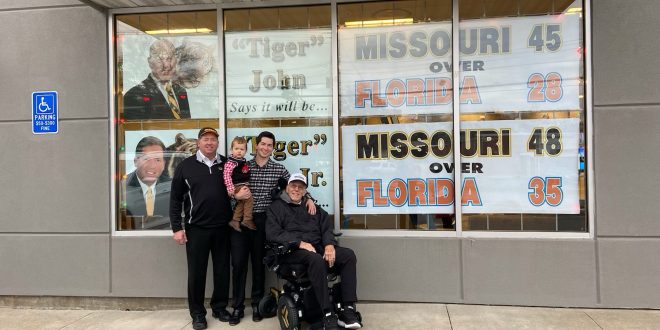 The late Tiger John Cleek predicted that Mizzou would beat Florida in November 2021. He's seen here with his family on November 20, 2021 in Columbia (photo courtesy of Cleek family and Zimmer Radio's Andy Tutin)

Organizers are hoping for a good turnout for Saturday morning’s Walk to Defeat ALS at Columbia’s Cosmo-Bethel park.

Businessman John Cleek Jr. says check-in begins at 8:30, and the walk starts at 10.

“We’re looking to have people come out and support. Raise funds for research and programs and to help people and clients that do have ALS. So we’d love to have you come out,” Mr. Cleek says.

Parker-Millard noted in its obituary that Tiger John wanted badly to beat ALS and knew that research was the only way a cure could be found. He and “Team Tiger” raised $83,000 during last August’s walk.

Organizers of Saturday’s walk say the key to finding a cure is research and that your contributions at the walk will be appreciated. Cleek Jr. tells 939 the Eagle that any contribution will help.

Mr. Cleek says someone is diagnosed with ALS every 90 minutes.

Previous CPS’ enrollment has increased by more than 2,000 in past 11 years
Next Cole County lawmaker is hopeful about special session tax cuts