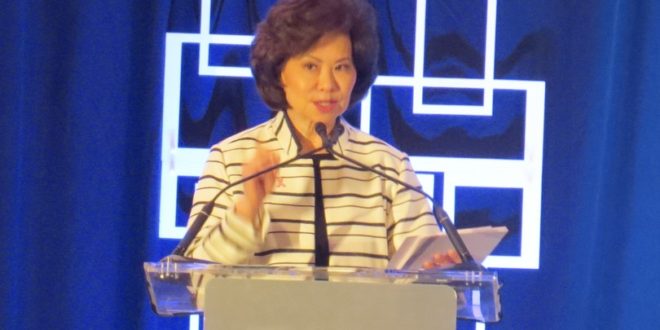 (Missourinet) The U.S. Transportation Secretary traveled to St. Louis on Tuesday to unveil a new initiative aimed at addressing disparities in transportation infrastructure in rural America.

Transportation Secretary Elaine Chao delivered the keynote address at the annual American Association of State Highway and Transportation officials meeting, which is taking place at the Marriott St. Louis Grand Hotel. She emphasizes that the fatality rate on rural America roads is twice that of urban roads.

Chao has announced a new program called the Rural Opportunities to Use Transportation for Economic Success initiative, which is known as R.O.U.T.E.S.

“Rural America, which has a disproportionately high rate of fatalities and is historically neglected, needs to have its transportation needs addressed,” Chao tells the audience.

The main focus of her address was the high rate of traffic fatalities in rural America. Secretary Chao cites numerous transportation safety statistics.

She’s also announced the formation of a rural transportation infrastructure council to lead this initiative. It will be called the ROUTES Council.

This new internal deliberative body at the Department will identify critical rural transportation concerns and will coordinate efforts among DOT’s different modal administrations. The Council will also create a rural resources handbook and will hold its first meeting in November.

Elaine Chao served as the U.S. Labor Secretary from 2001-2009 under President George W. Bush, and the U.S. Department of Transportation’s website notes she is the first Asian-American woman to be appointed to the President’s cabinet in American history.

The U.S. Transportation Department was established by Congress in October 1966.