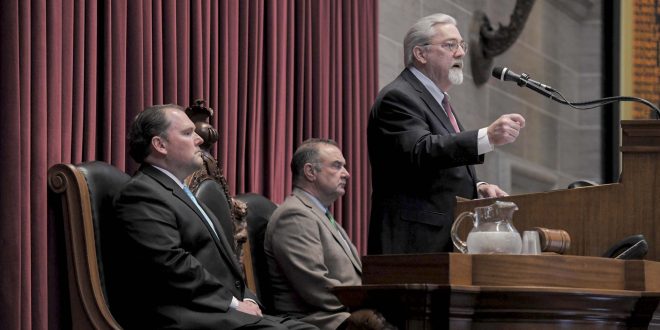 The Missouri Supreme Court’s chief justice says the state of the judicial branch is sound. Chief Justice Paul Wilson delivered his State of the Judiciary address on Tuesday in Jefferson City.

Chief Justice Wilson says those employees schedule every court hearing. He says more than 750,000 circuit court cases were resolved in Missouri in 2021.

Meantime, Chief Justice Wilson is calling on state lawmakers to approve bipartisan legislation aimed at protecting the private personal information of judges and their families. He emphasized court security during State of the Judiciary.

“Missouri judges have been harassed online and at home, they’ve been threatened, and they’ve had their personal information posted on the web,” Wilson tells state lawmakers.

He thanks State Rep. Bruce DeGroot (R-Chesterfield) for filing the Judicial Privacy Act. Degroot’s House Bill 2037 creates a felony offense of knowingly publicly posting on the internet personal information of a judicial officer or the officer’s immediate family for purposes of tampering with a judicial officer.

DeGroot’s bill has not been scheduled for a House committee hearing yet.

Previous Inside Columbia: Tiger Hotel getting renovation and name change
Next Providence and Vandiver intersection work in north Columbia is finished