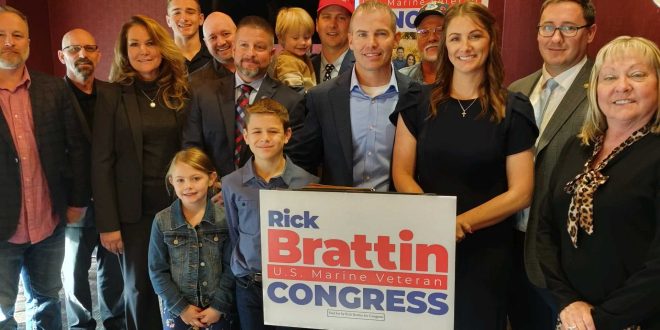 Saying our way of life is under attack, a conservative GOP state senator has announced his candidacy for west-central Missouri’s fourth congressional district seat.

State Sen. Rick Brattin (R-Harrisonville) made his announcement in downtown Columbia, telling reporters he wants to do the best he can to save the Republic.

“Because I really, truly feel that we are at the Alamo stage between liberty and freedom or tyranny and socialism and communism takeover in America,” Brattin says.

Brattin served four terms in the Missouri House from 2011-2018, before being elected to the state Senate in 2020. He calls for America First policies and blasts CRT.

The seat is being vacated by U.S. Rep. Vicky Hartzler (R-Harrisonville), who’s running for the U.S. Senate.

“I mean, I’m seeing Thanksgiving turkeys at $85 apiece, it’s unsustainable. So to continue on the path of unsustainable spending just to look good, sound good and be politically relevant, I think is just absurd,” says Brattin.

Brattin is also highlighting his military record, noting he served six years in the Marines.

He tells 939 the Eagle that he’s hopeful he can win a crowded primary. Other GOP candidates include State Rep. Sara Walsh (R-Ashland) and former Boone County Clerk Taylor Burks.

The district includes Columbia, Harrisonville, Moberly, California and Sedalia. During a live interview on “Wake Up Columbia,” Brattin says he’s hopeful that Cass County will remain in the fourth district. His senatorial district has five counties, which are all in the fourth congressional district: Barton, Bates, Cass, Henry and Vernon.