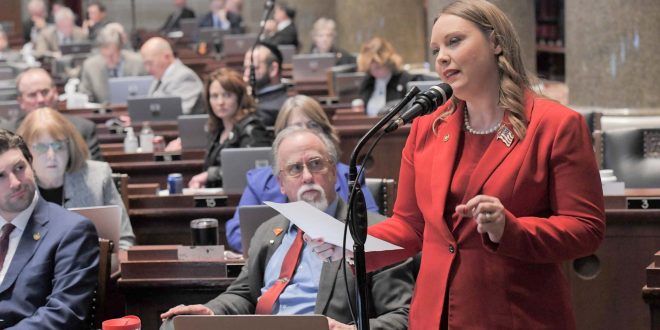 The Missouri Senate is expected to debate congressional redistricting Monday afternoon in Jefferson City. The Senate gavels in at noon, and Senate President Pro Tem Dave Schatz (R-Sullivan) tells 939 the Eagle that Senate is scheduled to take the issue up.

Meantime, supporters of a 7-1 GOP Missouri congressional map will rally this morning at 10 at the Statehouse, ahead of the scheduled debate. State Rep. Sara Walsh (R-Ashland), the House Majority Caucus chair, supports a 7-1 GOP map.

“It’s high time that we stand up and quit placing nice with the Democrats, and stand up and send another conservative to Washington D.C. to save our country. I mean, our country is at a breaking point,” Walsh says.

The 7-1 rally at 10 will begin with a prayer walk, and GOP Secretary of State Jay Ashcroft will be one of the guest speakers.

“In other states, Democrats are re-drawing (congressional) lines on partisan reasons and sending more Democrats to Washington D.C. We are a very red state and I believe that we should do the same, and stand up and send 7-1, one more conservative to Washington,” Walsh says.

Some Republicans oppose a 7-1 map because they worry it will lead to a lawsuit, with the courts potentially re-drawing congressional districts. Democrats also oppose a 7-1 map, saying it’s unfair and would end up in the courts.