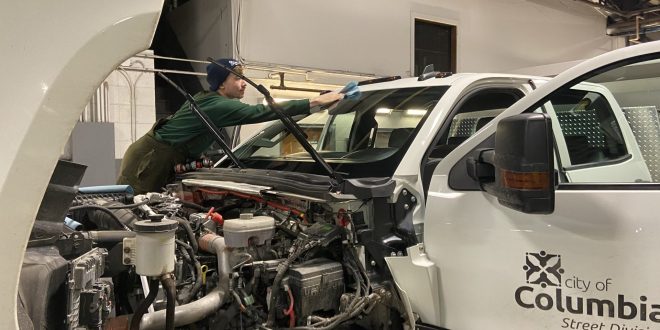 Temperature to drop below 32 in Columbia by tonight; motorists urged to be cautious

Columbia Public Works crews are warning motorists that temperatures are expected to drop below freezing by about 7 o’clock tonight (Wednesday). Public Works spokesman John Ogan tells 939 the Eagle that motorists should be careful.

“We would advise people to still keep it slow and only make trips if it’s absolutely necessary. There’s still a possibility of sliding off in wet conditions like this,” Ogan says.

Temperatures are still above freezing this afternoon. Columbia Police and Public Works advise you to increase your distance between cars today and tonight, and to clear your car windows of any snow and ice before driving.

Boone County firefighters responded to five crashes and minor slide offs in the snow this morning. Boone County Fire Protection District assistant chief Gale Blomenkamp tells 939 the Eagle that one involved a vehicle that overturned this morning on northbound 63 near 763, north of Columbia. No serious injuries are reported.