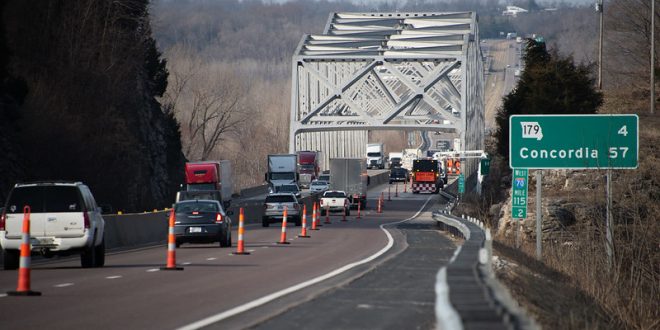 Motorists heading westbound on I-70 prepare to cross the Rocheport bridge on March 27, 2019 (file photo courtesy of MoDOT Flickr page)

Missouri’s governor will be in Rocheport Tuesday morning for the groundbreaking ceremony for the new $240-million I-70 bridge project. The ceremony will start at 11 am at Les Bourgeois.

Columbia and Boone County have each contributed $2 million to the project. Boone County Presiding Commissioner Dan Atwill tells 939 the Eagle that Missouri wouldn’t have received an $81-million federal grant without that local funding.

“Which I am told actually by Senator Blunt was critical in the decision-making process, because it showed that the local citizens were interested in this enough to put money on the line,” Atwill says.

The current I-70 Rocheport bridge was built in 1960, and the state Department of Transportation (MoDOT) says it’s in poor condition.

MoDOT describes the aging bridge as the lynchpin of America, noting it carries more than 12-million vehicles per year. Mr. Atwill says the project will include two new bridges, with three lanes each way.

“This (new) bridge will last for 60 or more years, so we’re going to be set for a long-term of road use and have access across the (Missouri) river without any difficulty,” says Atwill.

The project is also praised by Missouri’s largest general farm organization. Missouri Farm Bureau says the new bridge is critical in shipping farm products to buyers across the globe.

Truckers from across the nation use the aging bridge.  MoDOT says that within 48 hours, trucks carrying goods to all 48 lower states will have crossed the bridge.