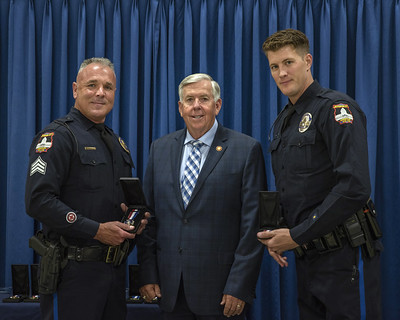 Two Jefferson City Police officers have received the Medal of Valor award from Missouri’s governor, for their roles in a deadly April 2020 incident involving a man suspected of several drive-by shootings into homes.

Director Karsten says Clawson and Ottolini chased the suspect into a wooded area at night, with Clawson jumping over a fence and tackling the suspect. She says the suspect shot Clawson twice, before being shot and killed by Ottolini.

Clawson has since been promoted to detective.

Governor Parson presented the medals to both men, who received applause from the audience.