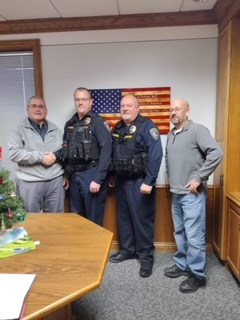 Longtime Fulton Police lieutenant Bill Ladwig will be the town’s next police chief.

He’ll replace veteran chief Steve Myers, who retired in early December after serving as chief for more than 19 years. Ladwig tells 939 the Eagle he’s honored for the promotion.

“And it is a privilege to ascend through the ranks and be the chief of a great department in a wonderful community. I’m ready to go and ready to keep moving forward,” Ladwig says.

Ladwig is serving as interim chief until Monday, which is his first official day as chief. His top priorities include upgrading Fulton PD’s body cameras, along with developing more training.

“This is my hometown. (I’m) really happy to be able to take this and possibly move forward and make some big things happen here at the Fulton Police Department for our citizens,” Hedges tells the Eagle.

Priorities for assistant chief Hedges includes training for Fulton PD officers and keeping up with technology.

Previous Why the NHL hit pause on the season now, and what comes next
Next Columbia’s first African-American city manager receives high praise from Mayor Treece and council; choice was unanimous