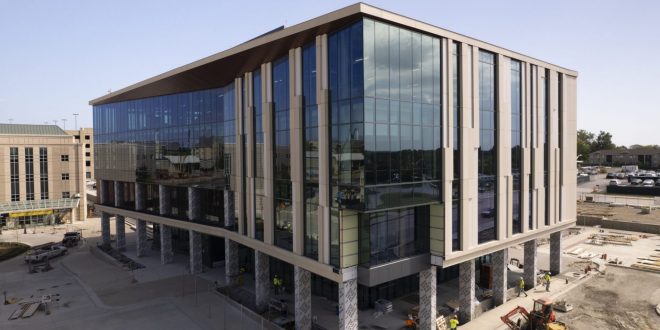 The UM Board of Curators has voted to name the $221 million NextGen Precision Health building at Mizzou for U.S. Sen. Roy Blunt (R), who's retiring next year (September 2021 photo courtesy of the UM System website)

Saying that he’s tirelessly advocated for the University of Missouri System during his years of public service, the UM Board of Curators has voted to name the $221 million NextGen Precision Health facility in Columbia after U.S. Sen. Roy Blunt (R).

Mizzou notes that the massive 265,000 square foot facility will train the next generation of scientists who will help Missouri address future health care needs.

Senator Blunt says the NextGen Precision Health initiative will accelerate progress toward new medical breakthroughs. The Board of Curators praises Senator Blunt for obtaining millions of dollars in federal funding over the years for Mizzou.

Blunt is the ranking Republican on the U.S. Senate Appropriations Subcommittee on Labor, Health and Human Services, and Education.

The facility, which is close to completion, is located on Hitt Street on Mizzou’s campus. It’s been the top priority for UM System President Dr. Mun Choi and for the Board of Curators. President Choi says the initiative will bring clinicians and industry leaders together to transform health care and save lives by finding cures to diseases.

NextGen also has the support of state lawmakers in both parties, including State Rep. Sara Walsh (R-Ashland) and State Sen. Greg Razer (D-Kansas City). Senator Razer, a Mizzou graduate, describes it as a facility that can cure cancer.

A grand opening for the new facility will be held on October 19.

Previous Jefferson City murder suspect in court on Friday; no cameras will be allowed
Next UPDATE: Two juveniles arrested for Columbia shooting; one suspect allegedly tampered with witness