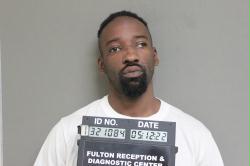 Missouri's Probation and Parole Board has revoked the parole for accused Columbia murderer Isaac Bryant (May 12, 2022 photo courtesy of the Missouri Department of Corrections website)

UPDATE: Accused Columbia murderer is back in prison

Missouri’s Probation and Parole Board has revoked the parole of a suspected Columbia murderer who was captured by authorities this week on Demaret.

35-year-old Isaac Bryant is charged with second degree murder for last weekend’s killing of Demetrius Ware in front of a home on Grand.

939 the Eagle News was in the courtroom on Thursday for what was scheduled to be Bryant’s arraignment. Bailiffs informed Judge Kimberly Shaw that Bryant has been transferred to the state prison in Fulton, after his parole was revoked.

In addition to the murder charge he faces, Bryant will also have to serve the rest of his seven-year prison sentence for robbery and assault.

Court documents describe Bryant as a danger to the community.