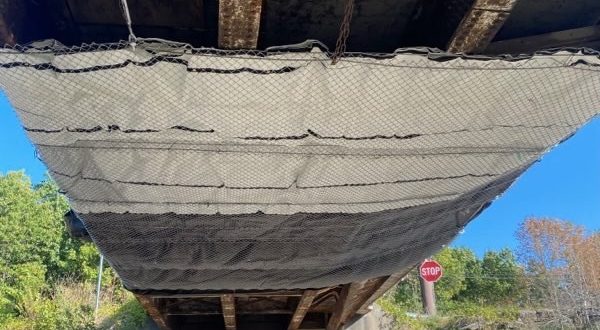 MoDOT has provided wrap to keep debris from falling onto traffic below the Sorrels overpass near Columbia (October 20, 2021 photo courtesy of MoDOT's Adam Pulley)

UPDATE: Both lanes of westbound I-70 have re-opened at Sorrels overpass near Columbia

Both westbound lanes of heavily-traveled I-70 at the Sorrels Overpass just west of Columbia have re-opened, after the state Department of Transportation (MoDOT) finished work on the underside of the overpass.

MoDOT has also re-opened the entrance ramp from Stadium Boulevard and I-70, which is near the overpass.

The Sorrels overpass, which sustained significant damage when a truck slammed into it on Monday, remains closed this afternoon. MoDOT engineer Randy Aulbur says crews have provided a wrap of the structure, to prevent any debris from falling onto traffic below.

The major damage to I-70’s Sorrels overpass has prompted MoDOT to accelerate bridge deck replacement on the 63-year-old overpass. Mr. Aulbur says bids for the emergency project will go out this week. It will be a combination of demolition, replacement and rehabilitation.

Previous Patrick: U.S. F1 driver would need right circumstances to be a big name
Next Everything you need to know about the Hamilton-Verstappen F1 title battle